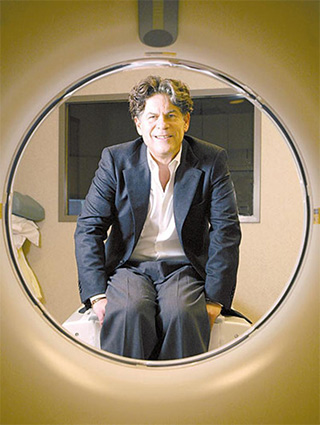 Hammerman's answer: Metro Imaging out-serviced the hospitals to win doctors as customers, offering them top-hat service with quick reads on their patients' images. Metro Imaging also catered to patients, offering them the option of learning their test results - good or bad - before they leave the company's offices.

The concept has been successful enough that Metro Imaging has expanded to five locations, each with a radiologist on site.

"We've always told patients their doctors will have their test results within a day. Sometimes that's too fast for the doctors," said Hammerman, Metro Imaging's CEO. "Some (doctors) have asked us to tell patients they'll have the results in two days."

Metro Imaging's "patient-first" philosophy has served it well. The business has expanded despite the entry of new competitors in the field, including national practices such as Center for Diagnostic Imaging, as well as hospitals, which operate their own imaging businesses. There are also radiologist groups that have both formed their own imaging centers and have partnered with national firms.

"We could make a lot more money. But our owners, including Dr. Hammerman, want to be full-service," meaning staffing a radiologist at every site and not having images read remotely, said Christine Keefe, Metro Imaging's chief financial officer. Metro Imaging generates more than $30 million a year.

Hammerman is also picky about the kind of people who work for Metro Imaging, she said.

"You can be a good technologist; you also have to be compassionate and caring. Patients don't often see the radiologist, and they always see the technologists (who run the imaging equipment)," Keefe said.

Hammerman, 58, has hired all the staff and instilled in them the "patient-first" philosophy. As Metro Imaging has expanded to nearly 70 employees, Hammerman now only interviews finalists for job openings, but his criteria for customer-friendly staff remain the same. In his words: "Everybody we hire would be someone who could work at Disney World."

For Hammerman the idea to start his own company came in the 1980s when he was a staff radiologist at SSM St. Joseph Hospital West in Lake St. Louis. A new administrator had been assigned to the hospital but was still on duty with the Air Force and had not arrived yet, Hammerman said. During the interim, Hammerman selected radiology equipment and hired staff. The experience gave him the impetus to assemble an investment group, including himself and a dozen other radiologists, and start their own center.

Metro Imaging was born as RIC South County Imaging Center in 1994. It changed its name to Metro Imaging when it opened a location in west St. Louis County in 1997. The business opened three more offices through 2003. Metro Imaging is profitable, Hammerman said, but with more competition moving into the region and reimbursements from Medicare and other insurance providers dropping, he's thinking hard before expanding again.

Overall reimbursements from insurance and Medicare have dropped from 65 percent of charges a few years ago to 61 percent, he said.

"That seems like a small difference," Hammerman said, but keeping up with the latest technology and keeping a qualified staff is expensive.

The business has no plans to expand outside the St. Louis area, he said. "It becomes a question of quality. If we go out of town, we'd have a harder time controlling that," Hammerman said.

The high quality of service is one reason physicians such as Dr. Irl Don, a rheumatologist with Clayton Medical Associates, continue to refer patients to Metro Imaging. "I like to read my own images, but I call on them because I have a lot of confidence in their doctors," Don said. "I can't say that about every imaging practice."

Outside of Metro Imaging, Hammerman is a fan of playwright Eugene O'Neill and is the Webmaster for an Internet site devoted to his works, http://www.eoneill.com.

He and his wife, Marlene, have three grown children: Adam, a local Web designer; Zachary, an attorney with Greensfelder, Hemker & Gale; and Abigail, who just graduated from law school.