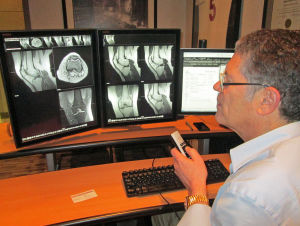 "I learned a lot from my father, as I watched him start and operate successful furniture and appliance and advertising businesses," said Hammerman, chief executive of Metro Imaging. "The two things that most stand out were his ethics and how he treated his employees."

He said that contrary to industry practice, Metro Imaging has never paid any physicians to refer patients for imaging or allowed referring physicians to become investors. His firm took a stand against such perceived conflicts of interest, even though Missouri is among the most permissive states when it comes to radiology self-referrals.

The company is owned by a dozen radiologists and has about 100 employees, including seven of its co-owners.

"My employees don’t work for me, they work with me," Hammerman said. "They’re family. And that’s exactly the relationship my father had with his employees."

Radiology has become a low-margin business, especially for smaller providers. National imaging companies such as CDI are buying up many of the radiology services that have only one or two offices.

"The reimbursement has been cut over the years to the point where it’s hard for a Mom-and Pop to make it work," Hammerman said. "We’re able to do it because we’ve got five facilities (and) we advertise. ... If the margin is cut any more, they’ll all go away, including us."

In 2006, Metro Imaging began an advertising campaign that pledged to give patients "on-site results." As part of that effort, its radiologists meet occasionally with patients — sometimes to give them the bad news about a cancerous tumor.

"As doctors, radiologists tend to be locked in the basements in dark rooms," Hammerman said. "It was gratifying to interact with patients more."

Four years ago, Metro Imaging began hitting the price issue in its radio and television advertisements. Hospitals were typically charging more for these tests, and patients suddenly had more skin in the game because they were starting to pay higher deductibles.

"The hospitals don’t like it," said Hammerman. "They’re having trouble with the fact that patients can come here for a lot less. ... I’m not campaigning to get as much as the hospitals get, because I think that health care should be affordable."

Metro Imaging performs about 25,000 radiology examinations a year, including MRIs, CT scans, mammograms, ultrasound and fluoroscopy tests. Its annual revenue is about $16 million. Typically, hospitals are reimbursed by the federal Medicare program and private insurers at a far higher dollar rate per procedure.

"We have a fixed overhead," he said. "To the extent that reimbursement has been ratcheted down, we have to do more volume to reach that break-even point. ... Our volumes are as high as they've been, but we're not making more and more money."

In a recent interview, Hammerman spoke of changes in the health care industry and new pressures on his business. Here is a transcript:

Why is health care so expensive?

Health care is so expensive, No. 1, because there’s too much of it. We do a lot of unnecessary tests. We do a lot of unnecessary procedures. Some of that these days has to do with self-referral (by physicians). Some of that has to do with: we need tort reform because a lot of time physicians are running scared that if they don’t order every test in the book and if they miss something, they’ll be sued. Part of it has to do with end of life. We spend a lot of money on end-of-life-care when people maybe should die with dignity and not have all that done.

How would you characterize the level of competition among providers in the health care industry?

There is a fair amount of competition, although it’s not necessarily all on a level playing field. We don’t all get reimbursed the same. We don’t all know what each other is getting reimbursed. Hospitals don’t all get reimbursed the same from one hospital to another, from rural hospital to city hospital. So you can’t compete on a level playing field because you don’t necessarily all have the same resources to compete. But it may be getting worse. If things get bundled, and smaller providers, independent providers get squeezed out, there will be less and less competition.

How do you explain Metro Imaging’s success as a company?

We stress service to patients. We stress service to referring physicians. We get them both what they want and need: we get physicians results in a timely manner. We get them high-quality exams. We get patients results at the time of service, if they want it. We get patients exams that they can afford. So it’s really been patient-centered. ... The other thing is that patients like coming to Metro Imaging because we provide a warm environment.

We don’t have "charity care" per se, meaning we don’t do exams for free. But basically our quote-unquote "list price" is significantly less than the hospitals, and if a patient doesn’t have any insurance, we give them a 40 percent discount if they pay at the time of service. So basically, what it would cost them out of pocket would be significantly less than what they can get the exam at the hospital. ... Basically, we can have five patients afford the exams here. For similar exams at the hospital, maybe one would get it for free and the other four wouldn’t be able to afford it at all. So it’s just much more cost-effective for patients to get an exam here.

What can state and federal regulators do to encourage more competition in the health care industry?

That’s hard because state and federal regulators have no control over what managed care (private insurers) reimburses us. ... So, they can’t affect that. I think that certainly regulators could control physician self-referral. There are some states, like the state of Maryland, that has very good, very strong laws where referring physicians can’t refer MRIs or CTs to themselves, and they can’t have ownership in MRIs or CTs. If that were across the board, then the independent imaging facilities like Metro Imaging and others would have a whole lot more business and would be better able to compete in the marketplace. ... There have been many, many studies that have shown that when physicians refer to facilities in which they have a financial interest, the utilization rate is ... higher. ... On a societal level, it’s increasing the cost of health care, and on an individual level it’s potentially causing patients to have exams they don’t need, costs they don’t need, and perhaps surgeries and other tests they don’t need.